Technology companies constantly hype their own processes and products. Often this hype is technically truthful, but misleading. But hype takes on a life of its own, misunderstood or exaggerated. Eventually hype leads to absurd claims. These cause real damage.

To protect yourself look at three laws of marketing hype.

Law one: Impossibility – The technology doesn’t exist or is impractical

Impossible claims are at the centre of technology hype. Or the hype focuses on things that might be technically possible, but impractical.

First consider a Guardian claim about Cambridge Analytica’s work for Donald Trump during the 2016 election. 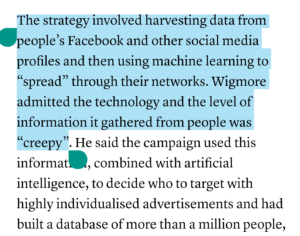 Here’s the problem though: This is almost impossible. The vast majority of people’s Facebook data is private. This data can only be seen by their friends or if they choose to reveal it to a company.

Facebook has made it increasingly hard for companies to harvest personal data. Barack Obama’s 2008 campaign did harvest vast amounts of people’s data – with their permission. But, even with Obama to motivate people, his campaign only managed to get data for 1 million voters. Subsequently Facebook made it much harder to do even this.

Of course you could try and scam your way to people’s data. You could create thousands of fake Facebook profiles. Then try to befriend all 128m American voters. Then copy their data. While this is possible on a small scale, Facebook is generally good at weeding out large scale scams like this.

[Update: The March 2018 revelations about Cambridge Analytica revealed that they did managed to get 270,000 people to use an app that harvested around 50m people’s Facebook data. This has been made impossible since April 2015 due to an API change. So while mass scraping of data is now hard – and was in the run up to the 2016 election – it was possible previously. Note that the decay rate of data quality will make a big difference to whether this data was useful in 2016]

No, Facebook doesn’t know more about you than your partner

A related example is almost any article that claims that companies know huge amounts about you. Yes, there is a lot of data, but it’s not always meaningful.

To test this visit Amazon. Then ask yourself how good their recommendations are. They’re probably ok – but not amazing. Amazon have more data to make recommendations about what to buy than virtually anyone else. Yet they struggle to get it right. To complete your personal test visit Google, Facebook and Apple’s websites. Have a look at how well personalised they are.

The vast majority of data is either private, anonymised or just not very useful. If you want a guide to what’s possible then have a look at the world’s best companies at selling data. Simply create an advertising account on Google. Or look at the business sections of Facebook, Amazon, Experian and Axciom.

Impracticality is closely linked to impossibility.

AI is currently going through a bubble that is often based on impracticality. Read reports on autonomous cars and you’d think every taxi driver in the world was about to lose their job. Then look at Uber’s current testing, which recently leaked, and you’ll find that humans had to take over the driving every 0.8 miles on average. That’s a long way from a technology that is going to satisfy regulators and insurance companies.

A final angle on impossibility is the law. Is the technology legal? And does it comply with relevant social network policies? Data protection laws, and discrimination laws, might simply make it illegal. And if a company scrapes millions of people’s data from Facebook they can expect to be sued.

New technology might be practical and legal. But it often isn’t worth the effort compared to easier and cheaper approaches.

There are lots of simple ways to improve digital campaigns, because they are simple to test. It’s common for testing to increase the effectiveness of a campaign by 10-20%, quickly and at low cost. So the second law is that technology may not be a better use of your time than simpler alternatives.

Another way to look at this law is to ask if you have exhausted your current testing programme. Have you got the right strategic choices? Are you using the right channels, for the right purposes? Have you optimised your customer journey, from acquisition to conversion? Is your creative optimised?

Most organisations have many areas where they can become more effective without needing cutting-edge technology. For instance digital content programmes can routinely become 20-40% more efficient.

I recently reviewed the digital marketing programmes of five of the world’s leading marketing automation providers. If anyone is going to be using cutting edge technology, it’s this group. Yet all of them fail on at least one basic measure. Several have very poor quality email programmes, with virtually no personalisation. Some of them don’t re-market to people who visit their website. Their websites are generic even when they know something about you.

Why is this? Some of it is inertia. But it also reflects a judgement that new technology isn’t worth the effort of implementing it.

Apply the second law to claims that people can predict the future (e.g. the X-Factor). You could try through social listening but that’s hard to get right. It’s easier, and probably cheaper, to commission a traditional poll.

A valuable technology has to reach, and influence, enough people to justify its cost. Reach comes down to two things:

The problem with anything new is that not many people use it. By definition. So there needs to be a route for it to penetrate its market.

This can sometimes happen organically. But most of the time this needs time and marketing.

Apply the third law to VR discussion and something becomes clear. Most VR won’t get to enough people to make a difference. Why? Because there’s no distribution system for it, unless it’s through Google, Apple, Facebook or Amazon.

What is the most hyped technology?

Look at the three laws and what areas of technology look overhyped currently?