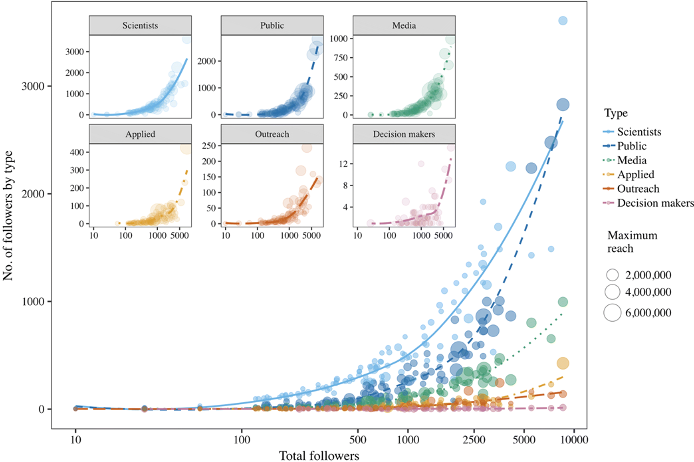 Darwin once said that “general and popular treatises are almost as important for the progress of science as the original work”. Today he would be on Twitter.

So what can scientists learn from the science of social media?

A recent study shows that Twitter can drive citations. 112 scientific papers were randomly divided into two groups. Thoracic Surgery Social Media Network members tweeted one group. The other group was kept as a control. Tweeted articles got significantly more citations than those that weren’t. On average they got 3.1 more citations, compared to 0.7 for the control group.

Open access articles got more citations. As did those tweeted by people with lots of followers. Again this is unsurprising. If people can’t read your article, they are unlikely to cite it. And the more people who see it, the more impact.

Scientists shouldn’t see this as a reason to just use Twitter. It’s also a reason to engage more broadly. If people read about your article in an email, on your website or LinkedIn, then it’s more likely it will get cited.

But social media doesn’t just influence other scientists. It also increases the chance of influencing everyone else. Groups as diverse as investors, politicians and journalists used Google search. It is the first tool they use to get up to speed on new topics. This sounds obvious. But it influences everything they learn.

Wikipedia influences scientific citations, a 2017 study shows. Experts wrote new Wikipedia articles, again in a randomized trial. Nobody had written about each subject previously. A new article was posted for half of the subjects, randomly chosen.

The results per impressive. Academic papers referenced in these articles had more citations two years later. This effect is so large that the paper estimated that Wikipedia influences 1/300 words in scientific papers.

People Google stuff. They find Wikipedia. And then they cite it in their own academic papers.

This study also found that Wikipedia helps spread research to the broader world. Policy makers and others aren’t, generally, reading academic papers. But they are researching things. And they often find Wikipedia.

Just putting things online isn’t all you need to do. It needs to get to the right people. And enough of them.

It’s common sense that you need to reach people to have an impact. It doesn’t have to be many though. Scientists should be aiming to reach thousands of people, not millions.

A good rule of thumb comes from a 2018 analysis of scientific Twitter account followers. This found that scientists who get more than 1,000 Twitter followers, appeal to a much more diverse audience.

As their audience expands so does their potential impact. They get to policy makers, media and doers like conservation bodies.

How to use social media

So what are the crucial things that scientists can do?

The full answer would take a book. But here are six simple things you can start on today:

Thanks to Ben Groom for his comments on an earlier version of this post. They aren’t incorporated but they have made me think about a follow up post on how policy making actually happens. For a preview of that read Ben’s useful paper on how the UK government changed its policy on discounting the future.