The annual Ofcom Communications Market Report is a treasure trove of data on how the UK behaves. I find myself regularly referring to it through the year as I work to distinguish hype from real trends.

Among Android users 9 of the top 10 apps are from Google or Facebook. On any measure – from users, to time spent – Facebook and Google are far ahead of competitors. 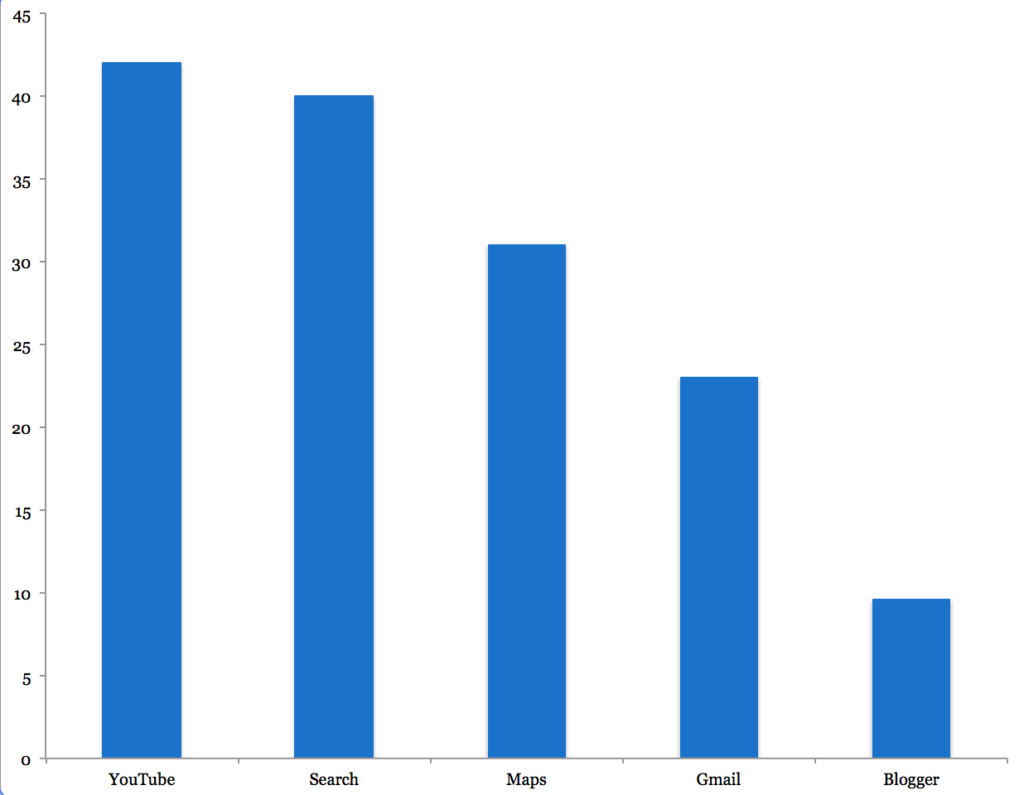 While Facebook has the social networking giants (Facebook, WhatsApp, Instagram and Messenger), Google has a wider variety of services, from YouTube and Search to Maps, Gmail, Drive and Chrome. Even Blogger, often forgotten, has almost as many users (9.6m) as Snapchat (10.3m).

This dominance can be seen everywhere. 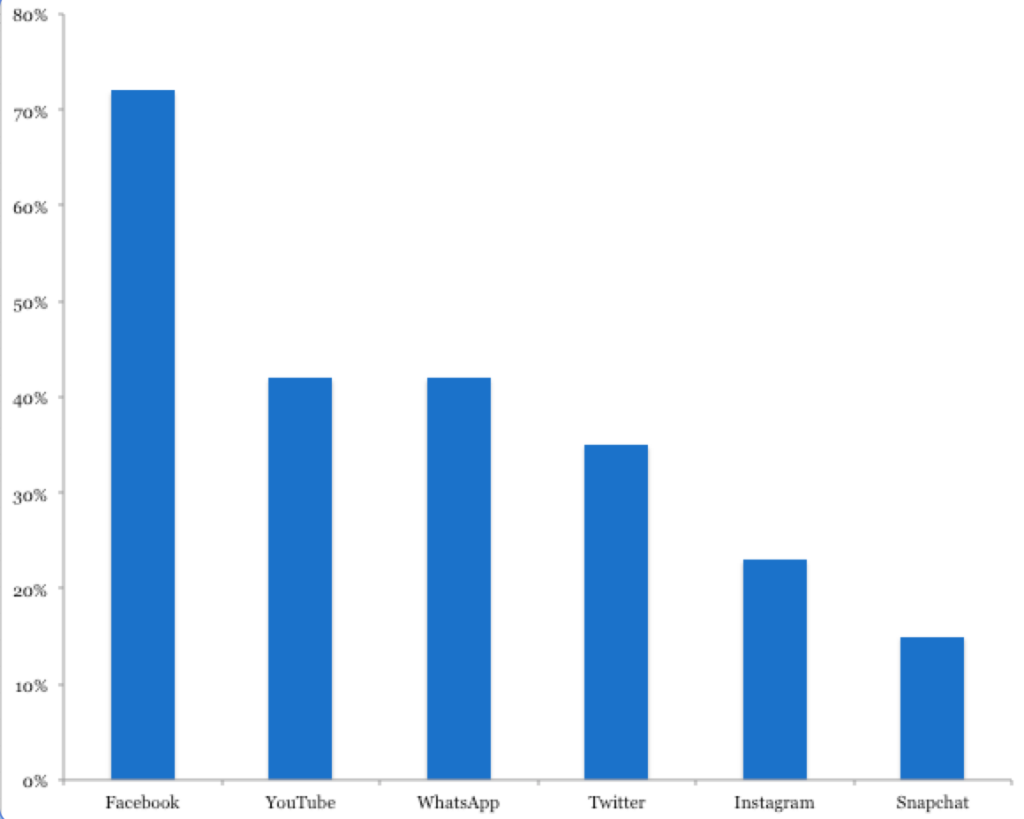 These apps notch up astonishing levels of use.  94% of Facebook users have used it in the last week, and on average users check it 12 times a day. WhatsApp is checked 10 times a day.

YouTube had 42m users in 2017 – far ahead of any other video sharing site. Increasingly YouTube is taking time from traditional TV viewing, with younger views spending over an hour a day watching it in March 2017.

SMS is suffering from instant messaging

While there’s no sign of email falling significantly this year, it’s no longer as dominant as it was.

… And no challenger is coming close

Snapchat’s often been talked of as a Facebook killer. But it’s nowhere near yet.

Snapchat has gained over 3m new users this year but is still mainly restricted to younger users. Even in its home territory of messaging, Snapchat is a distant third, with 10m users to Facebook Messenger’s 22m and WhatsApp’s 18.2m.

Twitter has gained almost a million users in the last year. While the company struggles, it continues to be a significant second-rank player, alongside properties such as Pinterest, Snapchat and LinkedIn.

Talking of which, LinkedIn appears to be in some trouble, losing 4m users this year. Given recent improvements in the app, this is one of the biggest surprises in the report. 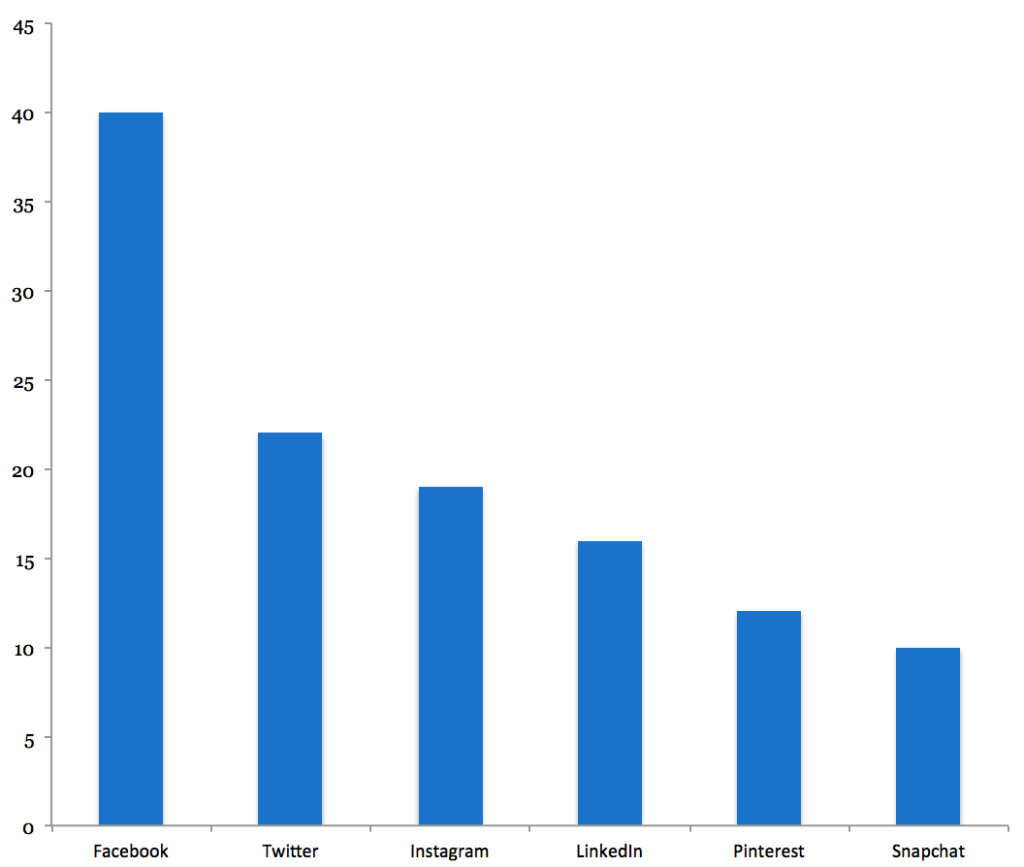 Driving this year’s figures is the continued growth in older internet users and the increasing dominance of smartphones.

This group, as they get more experienced, are using a wider variety of services, for more time, every day.

For instance 69% of over 54s are now using social networking, and almost half of them – 46% – are using Facebook.

54% of over 54 year olds are using WhatsApp, doubtless because of its similarity to familiar SMS services. As Facebook starts to monetise the app, there’s a huge opportunity to reach this age group via WhatsApp.

Older internet users are also increasingly users of YouTube – though currently still watch only 6 hours per month. If they start to get the YouTube habits of younger viewers, then the TV watching landscape will transform.

Ownership is up 5% on the year, so smartphones are now clearly the most common way to access the internet – well ahead of laptops and tablets. Meanwhile desktops continue their slow decline, with only 11% of people considering desktops to be their most important device for internet access.

And finally the dog that didn’t bark…

The internet giants have been trying to crack mobile payment for years. While mobile payment is commonplace in China, it’s still not mainstream in the UK. Apple Pay, Android Pay and Facebook have all tried. This year it seems they’ve failed again. Only 5% of people have tried mobile payment, up 1% on the year. As to why, it seems likely that using your contactless card is simply easier, with cards now used for 30% of payments.

Ofcom’s Communications report is full of unbiased research and surprising statistics. Download it and see for yourself here.

This article originally appeared in The Drum.