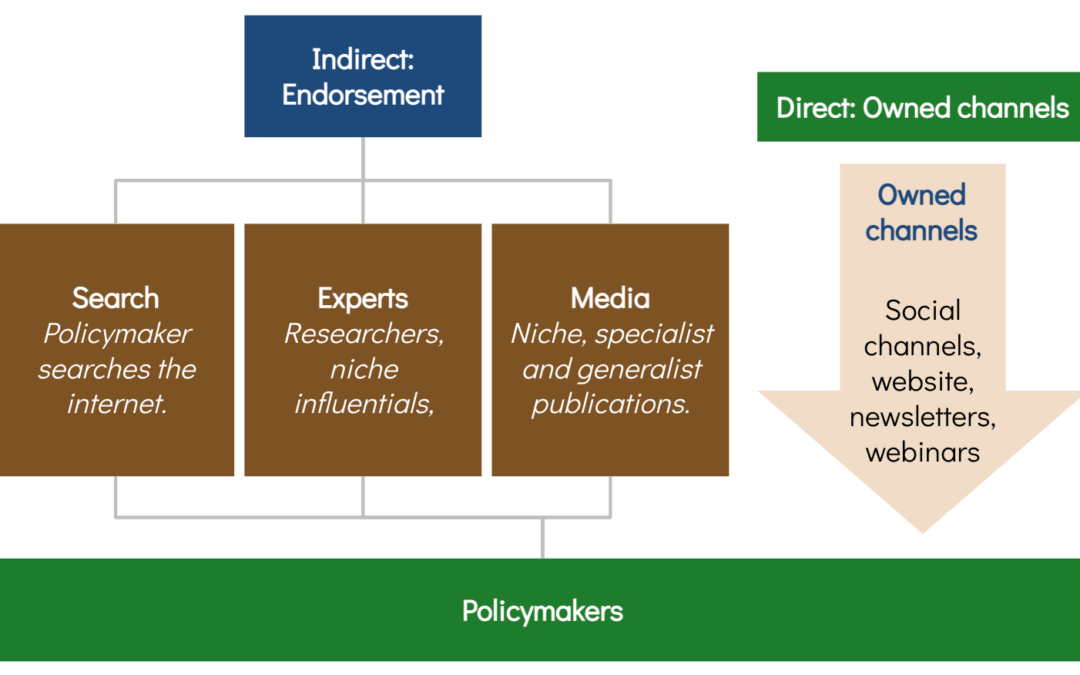 Are you a scientist who wants to influence government science policy? If so, here’s a guide, based on the science of communication.

We have worked with policymakers for over 20 years. And we’ve interviewed them and reviewed independent research about what influences policymakers. Typically we group these into four channels of influence.

A small number of scientists have their own media channels, read by significant numbers of policymakers. But not many. Three channels are particularly useful.

Twitter can be effective at directly reaching some policymakers. For instance on President-elect Joe Biden’s Covid-19 Task Force, 10 out of 13 are Twitter users.

The Coronavirus pandemic has thrown up some scientists who are doing a great job explaining complex science. If you want to learn from them, then I recommend Eric Topol, Angela Rasmussen and Emma Hodcroft.

Email is still highly effective. Zeynep Tufekci’s newsletter is a good example. Email tends to be more read than the equivalent tweets because it hangs around in people’s inboxes. Email is also easier to forward to other people. You can analyse what people are clicking on more easily. And it’s easier to automatically publish emails to a website, so that it appears in Google search results. Journalists and other experts have returned to using email newsletters in recent years, but scientists are lagging. This is an opportunity for savvy scientists to stand out.

LinkedIn also continues to be valuable. LinkedIn has several useful attributes for scientists. Firstly it’s relatively easy for your article to get to a large audience. LinkedIn is short of content, so it’s easier to cut through the noise. Secondly you can see, approximately, who reads your article. For instance I can see that people from Gartner and GSK read a recent blogpost of mine.

Scientists use the media to influence government science policy

The second major route for scientists to influence policymakers is through the media.

Every policymaker we have interviewed has told us of the huge impact that media has on them. For example:

When surveyed policymakers give remarkably consistent accounts of what media they consume. While they keep an eye on the media which has the largest audiences, it’s the quality media that matters most to them.

While there’s relatively little overlap between media read by EU and US policymakers, the pattern is generally the same. Policymakers are reading publications which provide intelligent discussion of public policy.

Who influences the upscale media though?

We have traced hundreds of stories in upscale media back to their source over the last 20 years. These stories are influenced by two things:

So how do the media choose which academics to talk to? Our experience is that it’s people who are easy to get hold of. And people who say interesting things. The interesting bit is fairly obvious, even if many experts fail to be interesting in practice. The easy bit is often neglected. Journalist’s deadlines are shorter than ever. So replying in minutes or hours is far more effective. The great news for scientists is that once a journalist sees you as a good source, they will keep coming back to you.

This secondary group is extremely interesting. Most journalists, in every sector, read expert sources to understand their area better. We have researched this in depth – through interviewing journalists, tracking their citations and seeing who they follow and interact with in social media. These, more niche, sources themselves rely on even deeper experts. Like scientists.

So while it’s hard for a vaccine scientist to directly engage a journalist at the New York Times, it’s much easier at, say, Stat. And easier still to talk to an expert like Derek Lowe.

Policymakers aren’t always led by the media though.

Sometimes policymakers simply Google their problem. This influence on government science policy is something that’s so obvious that we often forget it.

And there’s an oddity here. Social media doesn’t show up very well in Google search results. So if an organisation is active on social media, it doesn’t necessarily mean it will show up in search results.

A regularly updated website is an easy way for scientists to increase their influence, just like an email newsletter.

It may seem obvious that experts influence government science policy. But the experts advising policymakers won’t necessarily be scientists. And if they are, they will often advise beyond their specialism.

These experts will use scientific advice. But the scientists who advise them, aren’t necessarily the best qualified scientists.

Being a leading scientist is not the same thing as being the scientist who has most influence over government policy. Studies consistently show that communications has an important role:

Well policymakers are always less expert than the experts they rely on. Obviously. Less obviously there are a lot of experts to choose from.

So it appears that scientists who are easily accessible, online and offline, have more influence. Scientists who influence other experts, are more likely to indirectly influence government policy.

If you only have a little time, then get started with Twitter. I’ve explained the evidence on Twitter in more depth here.

This will help you learn how to simplify complex science into bite sized chunks. In turn this will help improve your longer posts, whether on LinkedIn, your website, email, or ideally all three.

There’s a vast amount of evidence on how our brains confuse ease of recall with what’s true and what’s good. I’ve given a brief explanation here. Particularly relevant and important is the ‘mere exposure effect‘. In other words we are more favourable to the familiar. This is extensively discussed by Nobel Prize winner Daniel Kahneman in his book ‘Thinking Fast and Slow’.

My friend Mat Morrison recently did an amusing test of the power of recall. He found a number of people in major companies who buy legal advice, were willing to consider the firm Pearson Hardman. This firm doesn’t exist. Except as the fictional law firm in the TV series Suits.

This discussion of US policy making, based on the book If We Can Put a Man on the Moon: Getting Big Things Done in Government, is useful for understanding how policy gets made in reality. The Institute for Government has written a similar study, Policymaking in the real world, that examines the interplay between expertise and political reality.

And if you want a deeply cynical, but very funny read, then Trust Me I’m Lying is superb.

Sources for policymaker decision making include our own research, unpublished research kindly shared with us by several leading NGOs, and polling by SavantaComres and BCW, Portland and Erdos-Morgan. For citations in policy documents see Overton. And for an analysis of think-tank influence the 2019 Go To Global Think Tank Report is invaluable.