How do you fight fake news? There are lots of options. But taking real news into Russia is rarely mentioned.

I’ve put here an updated blogpost that I originally wrote back in March 2014. It gives some simple ideas about how to use Facebook advertising against Putin.

The problem: Russia is full of fake news

So I wondered if there was a way to counter this, right in Putin’s backyard.

In early March 2014 I started a small personal campaign to bring unbiased news to Russian speaking residents of Sevastopol, , the capital city of Crimea.

Finding unbiased news was simple. I found the Russian language pages of the BBC website and then set up Facebook advertising targeted at people who lived in Sevastopol.

Facebook advertising is quick to set up and reasonably cheap. Best of all it’s good at targeting people in specific locations.

Back then I thought it was a good time to extend this to Moscow (where Russian public opinion is split on the war) and to eastern Ukraine.

My ads reached 5,992 people in Sevastopol, resulting in 171 people clicking through to the BBC website – a fairly typical rate. In other words a reasonable number of Ukrainian or Russian residents. I paid an average of just under 10p per click – not unreasonable.

I hope that the impact might be magnified if people in Crimea then get into the habit of using unbiased news websites.

How to do this

Setting up Facebook advertising is easy – just follow this guide. Even if you’ve never done it before you’ll be able to set it up in 15 minutes .

If you want to get more ambitious there are alternatives for geo-targeted ads. Facebook is good because of its reach and ease to set up. YouTube also works well.

This gives you an idea of the sort of picture you should see: 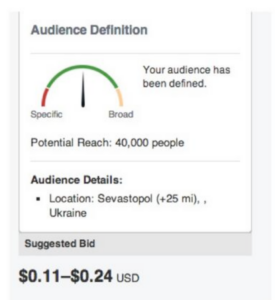